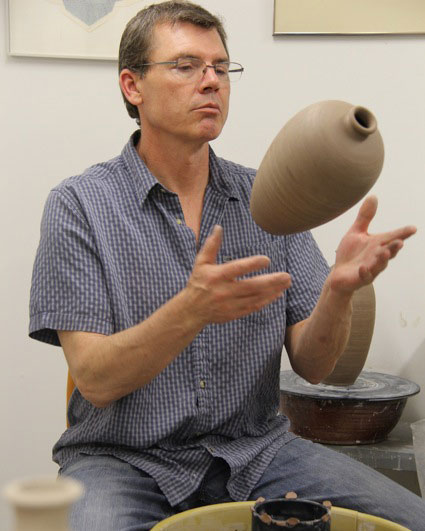 Andrew Thomson Andrew’s career has taken a few paths before arriving in the pottery studio. He has a B.A. in Anthropology from the University of Manitoba. Andrew has also been a Journeyman Carpenter for twenty years, a job he still enjoys and works at almost full time. About 2007 Andrew took a wheel throwing course at the Winnipeg Art Gallery, and continued that journey at the Stoneware Studio. The environment proved to be positive and the clay became a calling. In 2014 Andrew was invited to join the Stoneware Gallery, where his work may be viewed and is available for purchase. Andrew’s work is heavily influenced by the Canadian landscape and cultural environment. Manitoba’s vast horizon, the checkerboard landscape of the prairies and its people, the rock, rivers and lakes of the Canadian Shield, the mud, the water and stone, all play a role in the pots Andrew creates to be used and enjoyed.